Security Blog
6 Reasons Why AI is Important in 2020
5 Reasons Why COVID-19 Will Bolster the Cybersecurity Industry
A Portrait of a Modern Cybercriminal
State of Cybersecurity at Top 100 Global Airports
AI: Is the Hype Over or Is it Just the Solow Paradox?


Last week we discovered several security vulnerabilities on website of World Economic Forum (WEF) that is holding its annual meeting in Davos (Switzerland) these days. Our attempts to get in touch with WEF security team remained without answer.

Last week High-Tech Bridge’s Security Research Team was preparing our web vulnerabilities statistics report for 2013 [to be published next week]. Critical web vulnerabilities such as SQL Injections or Remote Command Executions are becoming rare and difficult to exploit as web developers are more and more aware of them. However, the number of medium-risk vulnerabilities, such as XSS (Cross-Site Scripting) is permanently growing. Being a medium-risk vulnerability, XSS usually provides a larger number of attack and exploitation opportunities to hackers than other web vulnerabilities, as it does not target the web application, but rather website visitors and administrators. Stealing cookies, website’s credentials and browser history is probably the least harmful vector of XSS attack. However, drive-by attacks via XSS that can infect a website visitor’s machine and turn it into a zombie just by clicking on a specially crafted link on the vulnerable website are much more dangerous.

At High-Tech Bridge, our non-profit Security Research Lab has helped 274 software vendors [at the moment of this article publication] fix almost a thousand vulnerabilities in their web applications affecting millions live websites. In addition, if we detect any vulnerabilities [on third-parties resources] while performing computer forensics projects for our customers, we offer our assistance free of charge to various NGOs to fix these vulnerabilities [exploited in the wild by hackers in chain attacks]. We also conduct security research out of curiosity (e.g. Yahoo) or discover vulnerabilities accidentally (NASDAQ). By doing so we do not expect a “thank you”, we just want to make the Web a safer place. One of the recent examples is the European Aviation Safety Agency (EASA) - we notified them about critical vulnerability on their website several weeks ago. They responded in 17 minutes upon notification and fixed the vulnerability in several hours. But unfortunately not every large organization is so reactive and responsive.

Last week while surfing the website of World Economic Forum (WEF) – world-known organization that is holding its annual meeting in Davos (Switzerland) these days (22-26 of January) - we unintentionally discovered an XSS vulnerability in one of their subdomains: 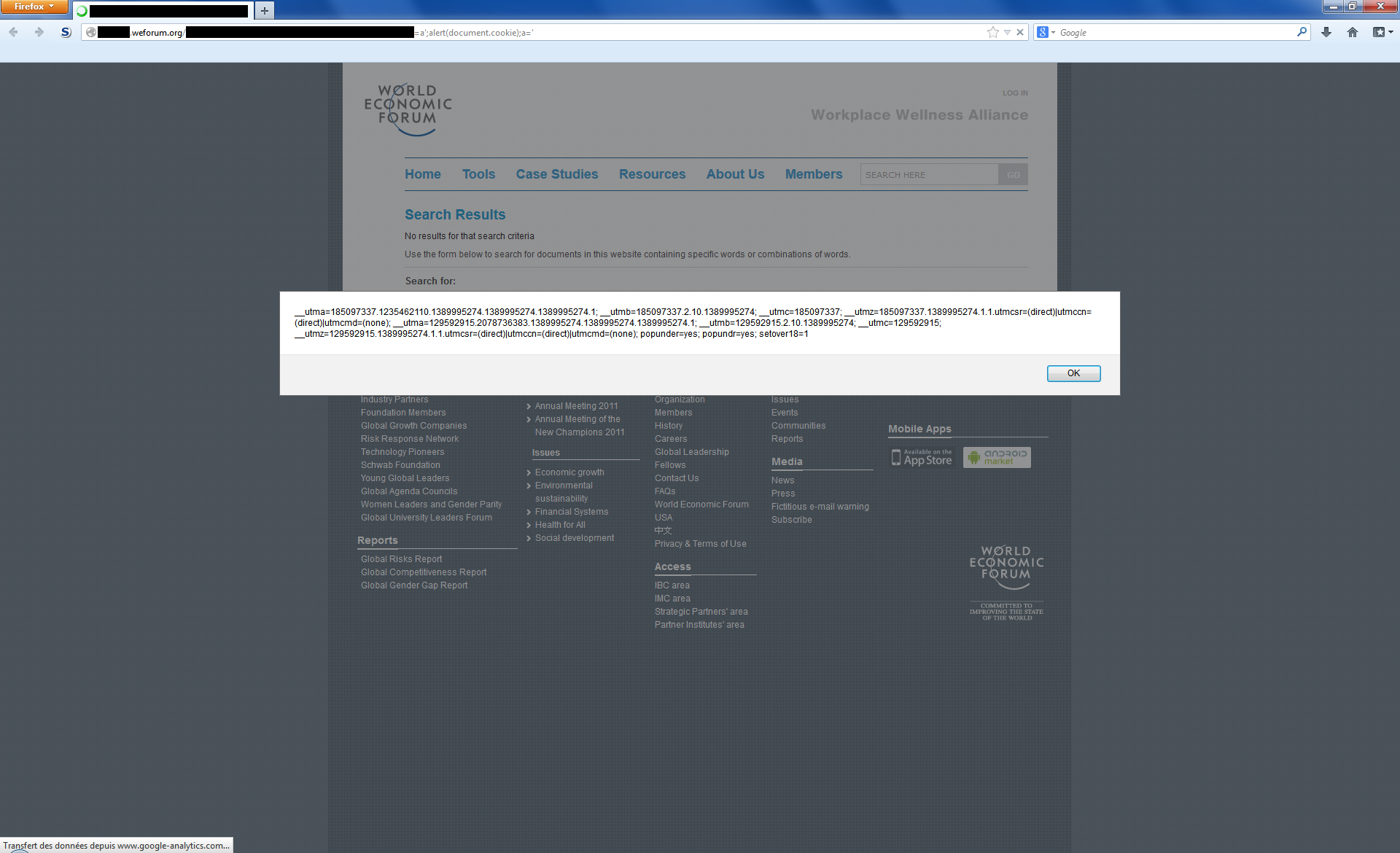 1. XSS vulnerability on a weforum.org subdomain

A quick and absolutely harmless test of their main website [www.weforum.org] revealed two more XSS vulnerabilities on it: 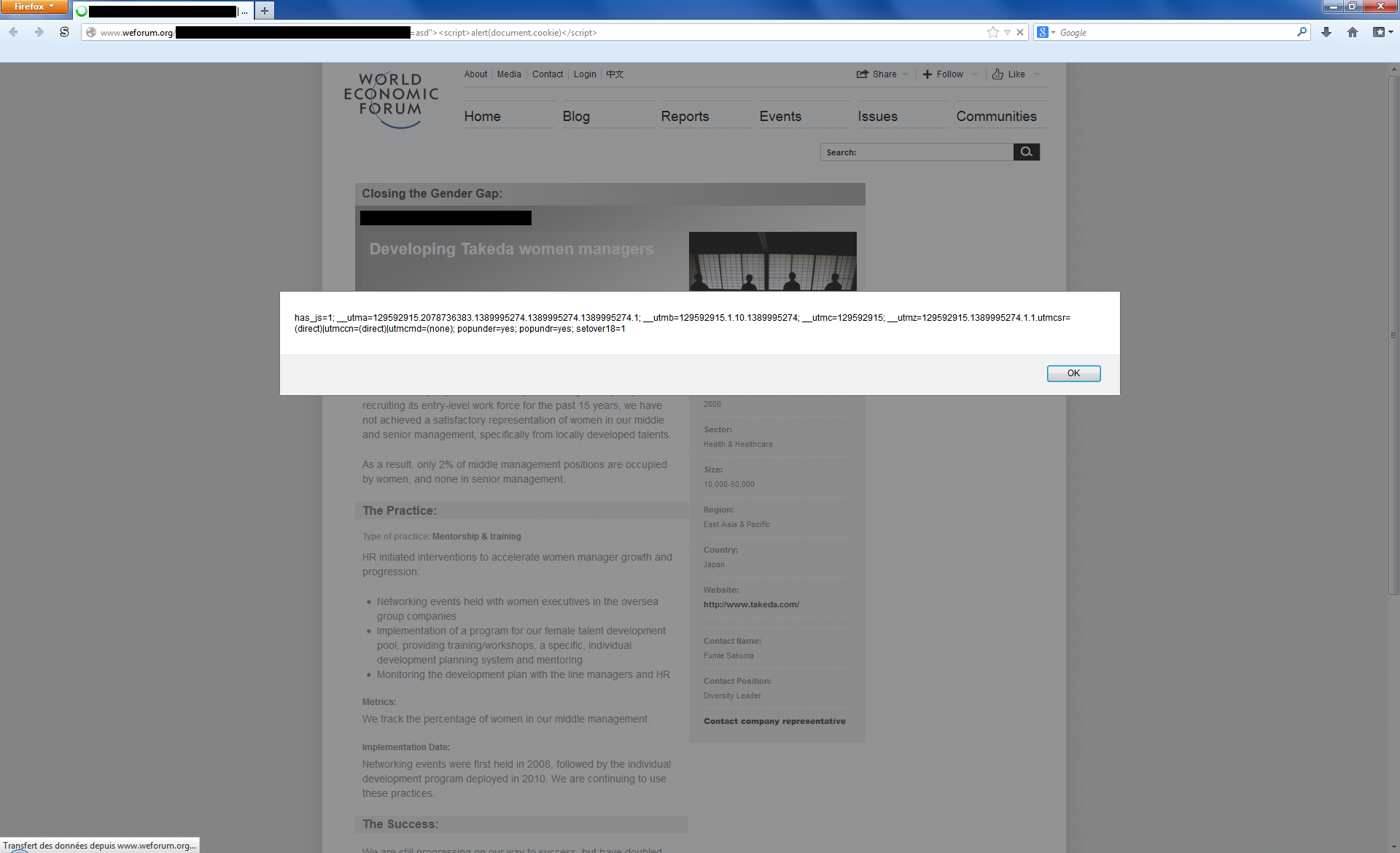 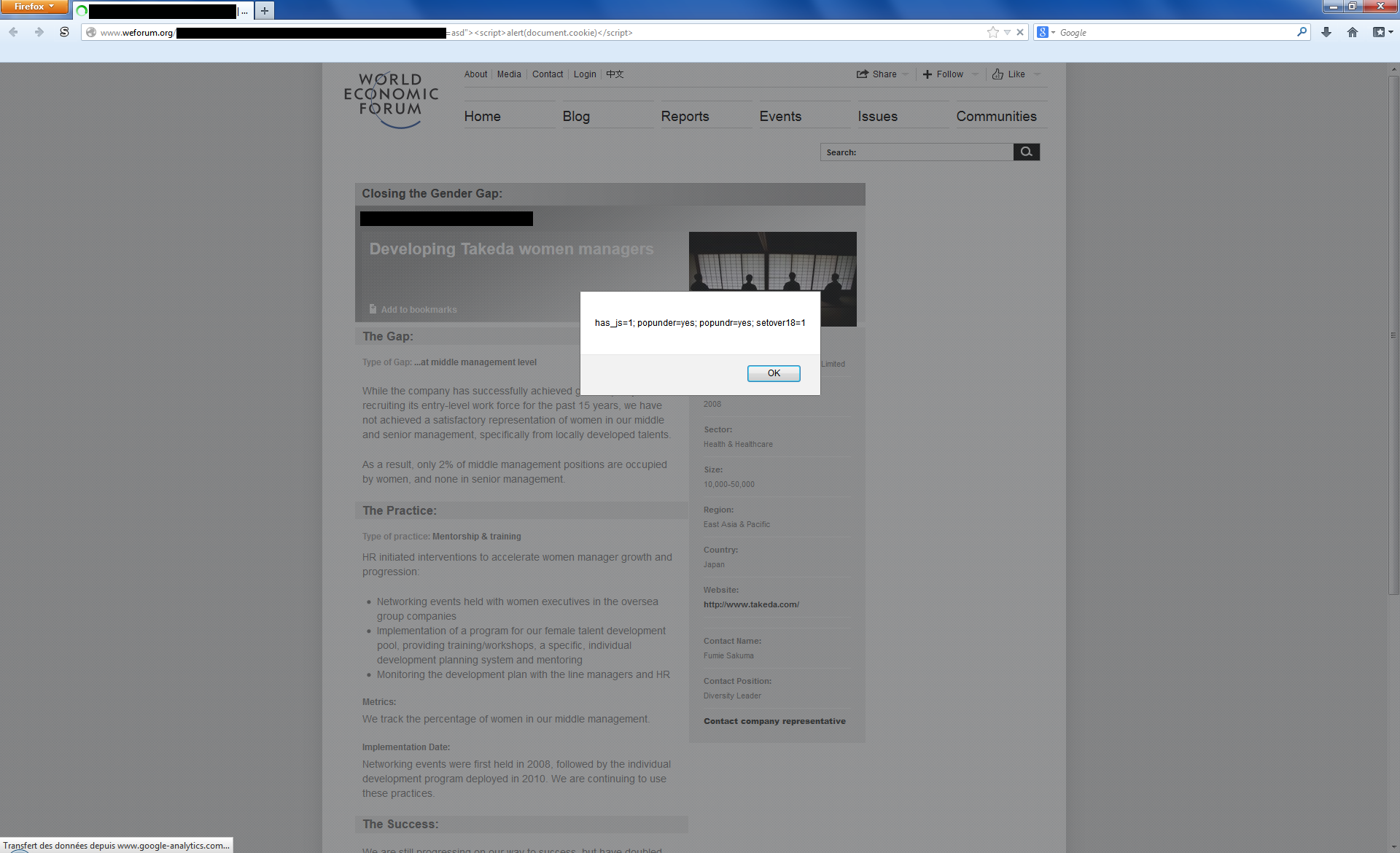 Being a bit surprised that such a respectable organization has security vulnerabilities on their website, we notified them via common security emails (abuse@, security@, admin@, etc) and all appropriate emails found on their website. As the WEF was already a victim of fictitious emails attack we expected a quick reply from them. However, on the fifth day since the notification we still didn’t get a single word from their side. We started searching for additional technical contacts so that we could reach them, but instead we found an additional quite serious information disclosure vulnerability.

The WEF website has a function to contact a company representative via a web form without exposing his/her email address: 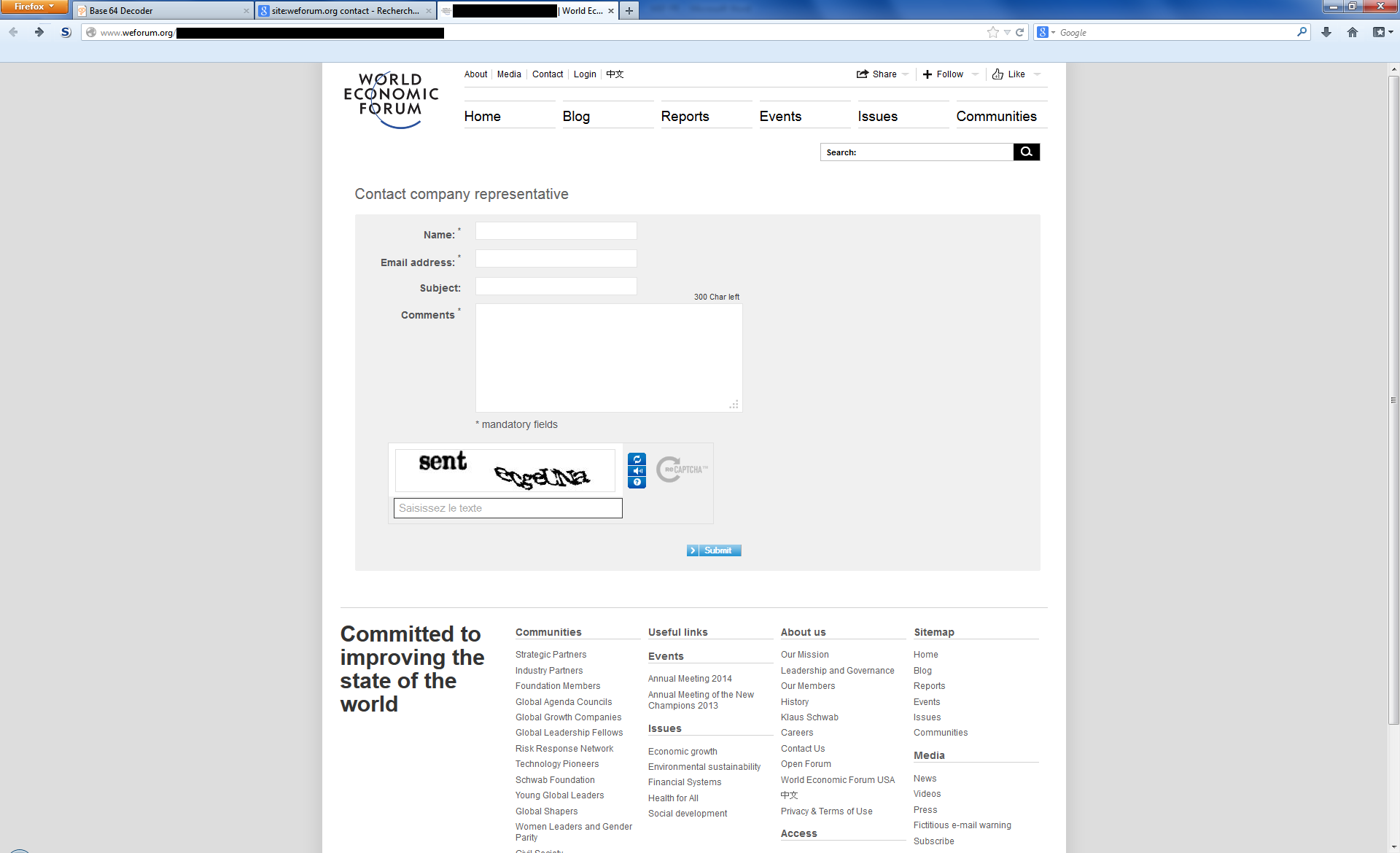 However, if you have a look into the HTML source code of the page - you will find a hidden HTTP parameter named "cr" that is encoded with Base64:

Being curious, we decoded the parameter and to our surprise we got a personal email address of the person in plaintext. For each ID (HTTP “n” parameter) email address was unique and belonged to a different person. Guided by ethics we obviously didn’t make a full list of the emails (the largest ID we found was 106,515), but we can presume that at least several thousands of forum stakeholders’ emails can be disclosed to spammers because of this vulnerability. The biggest risk here is that these personal emails can be used by hackers to perform targeted attacks in pair with XSS vulnerabilities that make quite an explosive and efficient hacking cocktail. The screenshot below demonstrates several of randomly disclosed emails:

Last but not least, the SSL certificate on the www.weforum.org is invalid and therefore cannot correctly encrypt the traffic between the end-users and the web server putting website visitors’ privacy at risk: 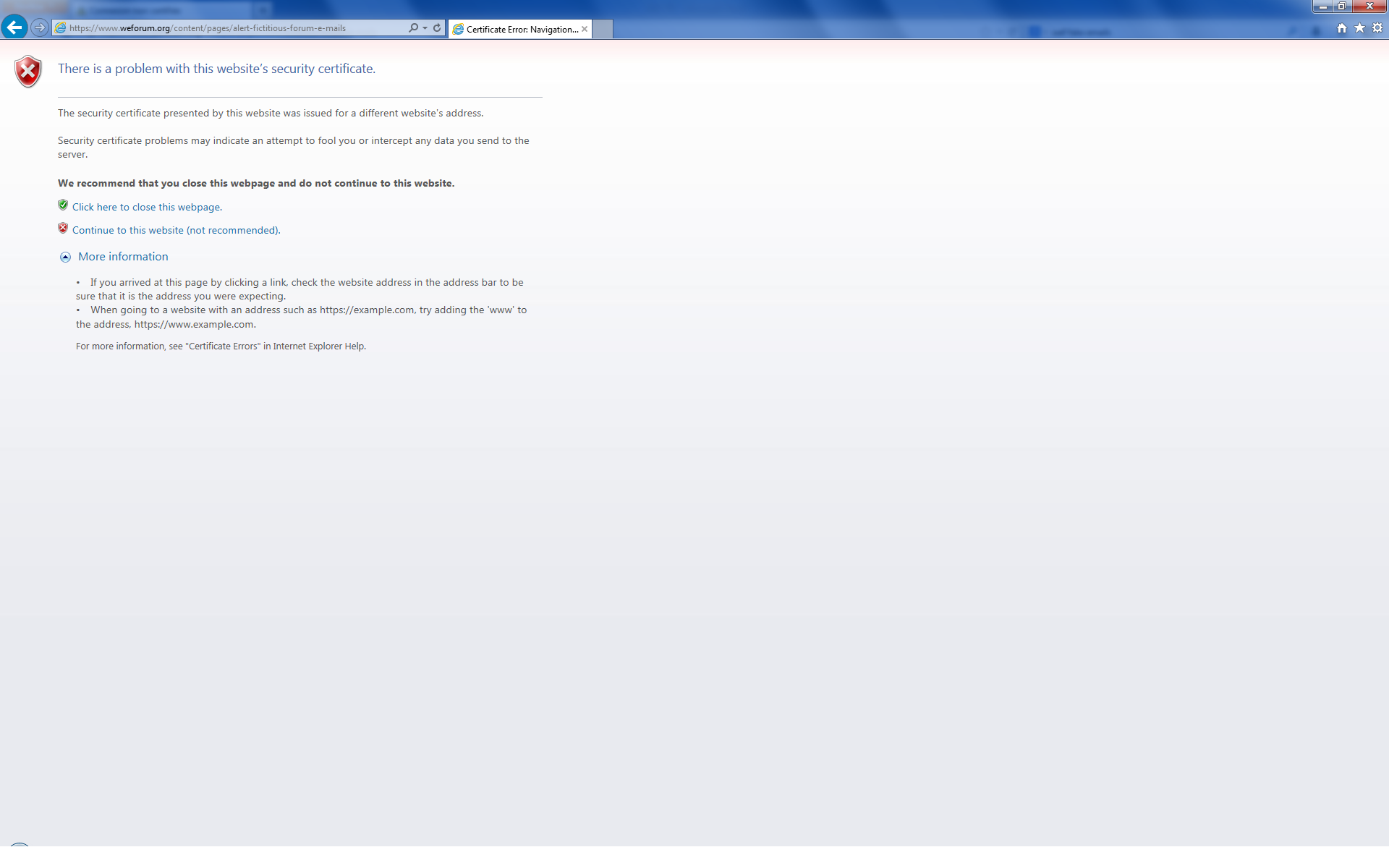 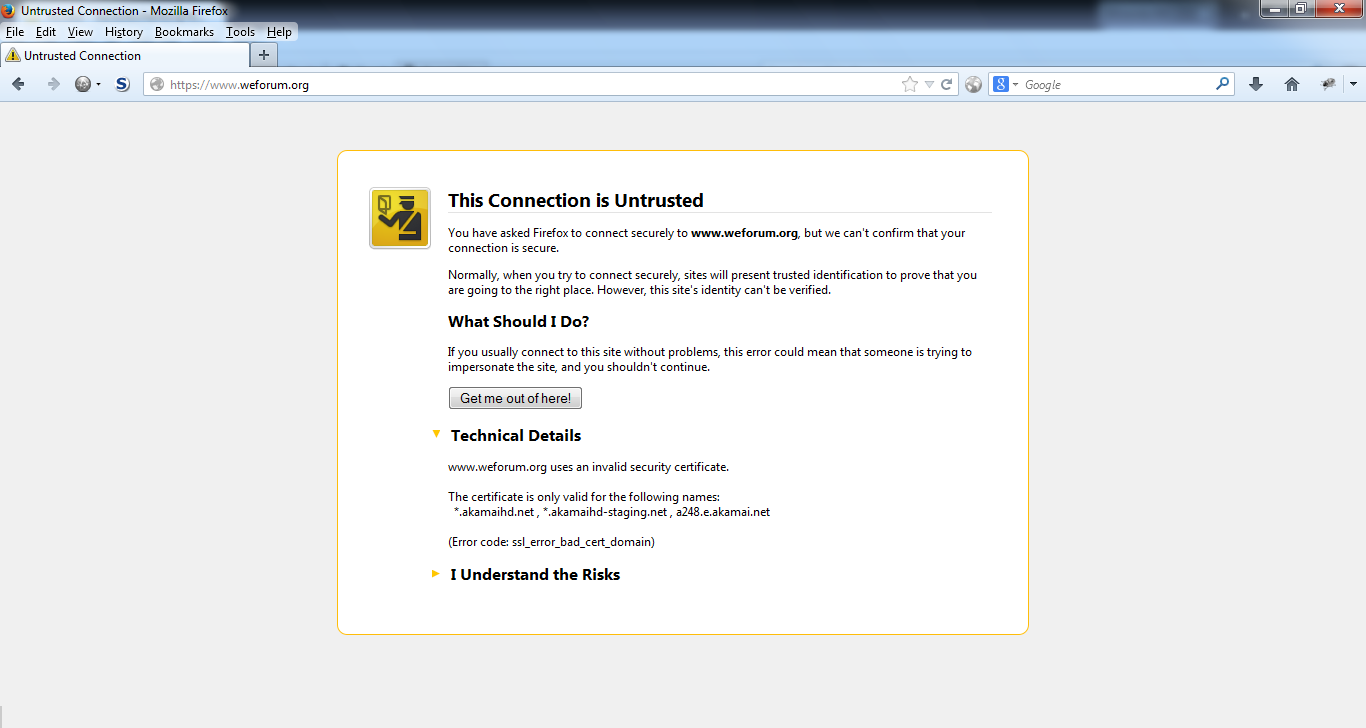 Ilia Kolochenko, High-Tech Bridge’s CEO, comments: "It’s regrettable that such respectable, large and important organizations like the WEF don’t pay enough attention to web security. This may not only put their own infrastructure at risk, but their stakeholders as well. Hopefully, they will change their security policy soon and provide security researchers with a responsive security contact, just like many other companies and organizations do today. Moreover, the vulnerabilities we reported are quite possibly just the tip of iceberg, as without their [WEF] permission we didn’t want to perform any further more “intrusive” security checks that can reveal much more serious vulnerabilities. I sincerely hope that these vulnerabilities were not exploited by hackers for whom WEF and its participants are very attractive targets."

At the moment of this article publication WEF still didn't reply to our notifications.


Update - 22 January 2014
WEF representative contacted High-Tech Bridge by phone, confirmed that all the vulnerabilities are fixed and thanked us.

Cyber squatters and phishers are winning the battle against antivirus companies