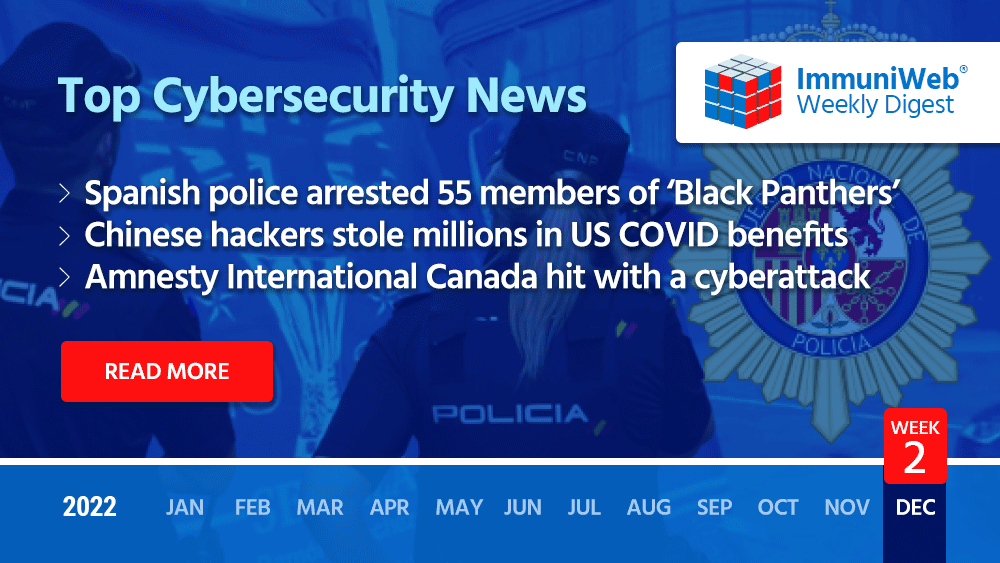 The Spanish National Police have dismantled a criminal organization that specialized in bank fraud through SIM swapping attacks, and arrested 55 suspects, including the group’s alleged leader.

Using the abovementioned scam techniques the fraudsters obtained duplicate SIM cards from victims’ phones, which allowed them to intercept the verification codes that banks send to their customers via SMS to confirm a money transfer. The police said that the gang managed to steal about €250,000 from at least 100 victims.

A state-backed threat actor linked to the Chinese government reportedly has stolen at least $20 million in US COVID relief benefits since 2020, the US Secret Service revealed. This is the first time that the US authorities acknowledged publicly the theft of taxpayer money in pandemic fraud linked to foreign state-affiliated hackers.

The hacker group behind the thefts is said to be APT41 (aka Winnti), one of the most prolific state-sponsored groups linked to the Chinese government. The threat actor has been active since at least 2010 and is believed to be responsible for multiple malicious campaigns targeting a wide variety of sectors, including the healthcare, pharmaceutical, telecommunications, and video game industries worldwide. In 2019 and 2020 several alleged members of the group were indicted by the US Department of Justice for perpetrating cyber-attacks aimed at organizations across the globe.

The Canadian branch of the international human rights non-governmental organization Amnesty International has revealed that a threat actor likely affiliated with the Chinese government has breached its infrastructure.

According to Amnesty International’s press release, the suspicious activity on its network was detected on October 5. The subsequent investigation into the incident showed that the attackers used tools and techniques previously linked to cyber-espionage campaigns conducted by Chinese hackers. The organization did not name the threat actor behind the attack, but said that there is no indication that the attackers stole any donor or membership data.

In related news, the international non-governmental organization Human Rights Watch (HRW) said it uncovered an ongoing social engineering and credential phishing campaign, which is targeting high-profile activists, journalists, researchers, academics, diplomats, and politicians working on Middle East issues. The organization believes that the campaign is the work of an Iran-linked state-sponsored threat actor known as APT42.

Multiple organizations and several government departments and public authorities in New Zealand have been affected by a ransomware attack on the Wellington-based managed service provider (MSP) Mercury IT, which provides a wide range of IT services to customers across the country.

According to New Zealand’s privacy commissioner, the incident was reported on November 30, 2022. The full scope of the breach and the number of the affected organizations has yet to be determined.

The attack involved a malicious Microsoft Office document, which referenced the tragic Itaewon incident in Seoul on October 29, 2022, when over 150 people were killed in a Halloween crush. The document exploited the CVE-2022-41128 vulnerability in the JavaScript engine of Internet Explorer. The flaw was patched by Microsoft as part of November 2022 Patch Tuesday.

The TAG team said they were not able to identify the final payload delivered in this campaign, but APT37 was previously observed deploying a variety of backdoors such as Rokrat, BlueLight, and Dolphin.