What You Need to Know
About Ecommerce Security

logins and passwords stolen
during 2019

Nowadays, virtually all industries have a swiftly increasing Internet presence, providing their customers and partners with an instant service around the clock, agile workflow and simple online payment. The growing range of enterprises entering into the emerging space of ecommerce spans from traditional and conservative businesses to highly disruptive startups mastering AI and blockchain.

The most popular market segments that adopt online business and shift to ecommerce include:

They all have a wide spectrum of fairly different cyber risks and digital threats, nonetheless, having one certain thing in common: being a highly attractive target for mushrooming groups of sophisticated cybercriminals. The more Internet presence organizations have, the bigger is their external attack surface is, enabling additional attack vectors and hacking techniques against the organization.

Want to have an in-depth understanding of all modern aspects of Cybersecurity of Digital Transformation for Online Business and e-Commerce? Read carefully this article and bookmark it to get back later, we regularly update this page.

Most of the victims active in the ecommerce and online business, however, don’t perceive or largely underestimate these risks, frankly believing that the size or the nature of their business makes them unattractive for skilled hackers, granting them with a digital immunity. Regrettably, this widespread belief is fatally incorrect and has already driven many promising companies out of their business or wiped out years of profitability in a best-case scenario.

Frequently, shrewd cybercriminals avoid attacking their victims directly, but rather targeting partners and other trusted third parties of the desired victim who have privileged access to the documents or data chased by the attackers. The more customers of an important size you have, the more chances you get that professional hackers will pick you up as their target.

of companies spent more
than 1 million USD on
GDPR preparation

growth of per employee
cybersecurity spending
in the last five years

Experienced cybercriminals virtually never attack large organizations or companies frontally, instead going after their suppliers and services providers including IT vendors, accountants or law firms. In light of a comparatively weaker cyber defense and oftentimes deficient security controls, this indirect approach significantly reduces the costs and complexity of an intrusion, makes incident detection and investigation highly unlikable and thus wisely exonerates the attackers from being detected and prosecuted by law enforcement agencies. Sometimes, even if the breach is later detected, smaller victims have no financial capacity to properly investigate and otherwise respond to it. While the attackers will get exactly what they are looking for without hacking the primary target directly. Hence, companies of all sizes coming from any industry segment are inevitably on the omniscient radar of unscrupulous cybercriminals.

Additionally, careless SMEs are almost inevitably falling victims to well-organized cyber gangs focused on wide-scale and low-complexity hacking campaigns. This includes automated exploitation of publicly known vulnerabilities in outdated WordPress or Magento web software. Cyber gangsters are continuously monitoring the Internet by using Shodan or special Google dorks, looking for exposed and vulnerable applications, servers and websites. Once a susceptible target is spotted, it’s automatically hacked, backdoored and even patched to preclude rival gangs from getting in later. Once attackers gather a few hundreds of Trojan’ed systems or websites, they sell them as a bundle on Dark Web marketplaces for as low as from $1 to $10 per compromised system. Afterwards, the systems are used to send spam, host pornography, conduct DDoS attacks or even launch sophisticated intrusions into governmental systems perfidiously camouflaging real identity of the attackers. Later, unwitting SMEs may get raided by law enforcement agents and even get indicted with a grim gamut of criminal charges for unlawful hacking or theft of intellectual property.

Companies of all sizes have to comply with the data protection enacted laws and imposed privacy regulations in e-commerce, online business and digital space. Perhaps, EU’s GDPR is the most widely known one thanks to severe financial penalties for non-compliance that may attain as much 4% of the yearly turnover or 20 million Euros, whatever is greater. This European law enacted in 2016 and fully enforceable from 2018 applies to all companies that process or store Personally Identifiable Information (PII) of European residents. Even a minor failure may trigger a complaint to a data protection authority, investigation and a penalty. Recently, the state of California enacted a similar state law CCPA purported to safeguard PII of Californians.

These are just a few laws and regulations to name amid the growing complexity of a modern-day compliance landscape. Furthermore, an unprecedently high number of businesses across the globe face an incremental number of incoming requests from their customers to provide a convincing proof of relevant data protection processes such ISO 27001 certification or PCI DSS SAQ (Self-Assessment Questionnaire).

One single XSS or SQL injection vulnerability on a forgotten subdomain, or accidentally exposed cloud storage on Amazon’s public cloud, may lead to a disastrous data breach, and a subsequent loss of business, fines from regulatory watchdogs and civil lawsuits from customers whose data is compromised. Worse, if technical investigation and forensics conducted by law authorities reveals a major non-compliance stemming from negligence or deliberate ignorance (e.g. failure to conduct regular application penetration testing for business-critical systems), European and American courts will likely demonstrate no leniency when imposing monetary fine and concomitant civil penalties.

Phishing, ransomware and magecart attacks against ecommerce and online business make spooky headlines every morning. Spanning from comparatively insignificant data leaks impacting a few thousands of individuals to hundreds of millions of hacked accounts with sensitive or payment data.

The most prevalent security and privacy issues usually stem from incomplete or outdated visibility of organizational IT assets and data storage. Few organizations maintain a comprehensive inventory of their Internet-facing assets such as websites, APIs, network services or public cloud storage on Microsoft Azure or Google Cloud. Resultingly, these systems are left unmaintained, and as soon as a new security vulnerability comes out, become a widely open door to the organizational crown jewels.

The second common problem is outdated software, being aptly exploited by cybercriminals to get into local networks, databases and file servers. Even one single outdated web CMS can be exploited to compromise web server and potentially the entire network, corporate CRM and ERP.

Third The third most alarming issue likewise figures among the most laborious ones to mitigate: human mistake exacerbated by omnipresent forgetfulness and carelessness. Software developers may accidentally leak sensitive source code with hardcoded logins and passwords on GitHub, a network engineer may forget to properly configure access permissions at AWS S3 bucket with confidential information, or a C-level executive may neglect enterprise password policy and use the same password on his or her personal accounts. Watchful attackers rarely miss such invisible time-bombs, systematically converting them into a valuable loot.

To avoid falling a victim to cybercriminals we recommend undertaking the following 5 steps:

How We Help Prevent Data Breaches and Secure Online Business 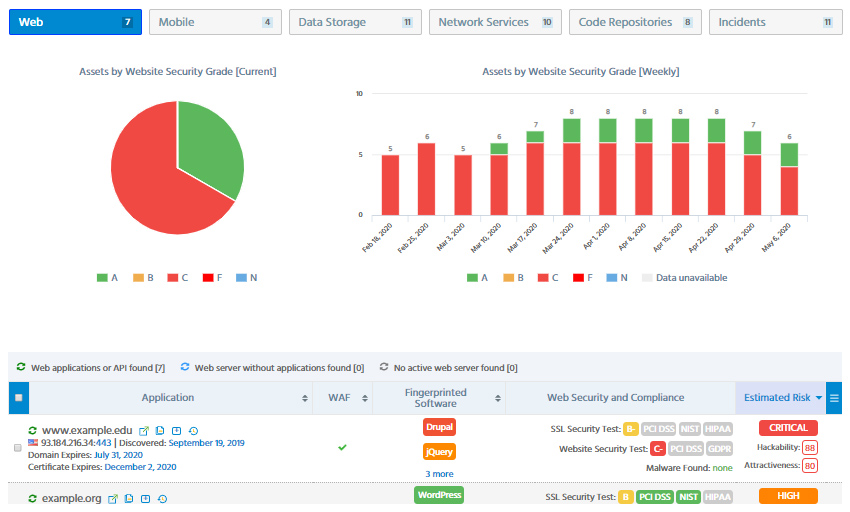 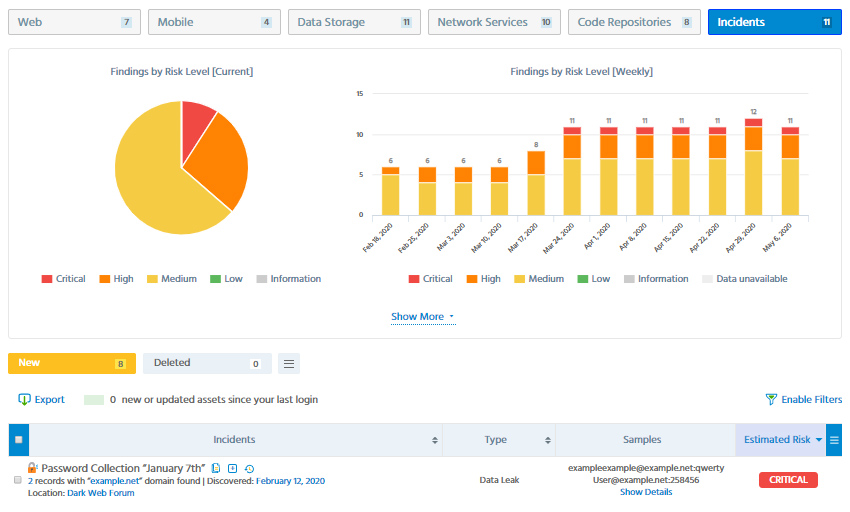 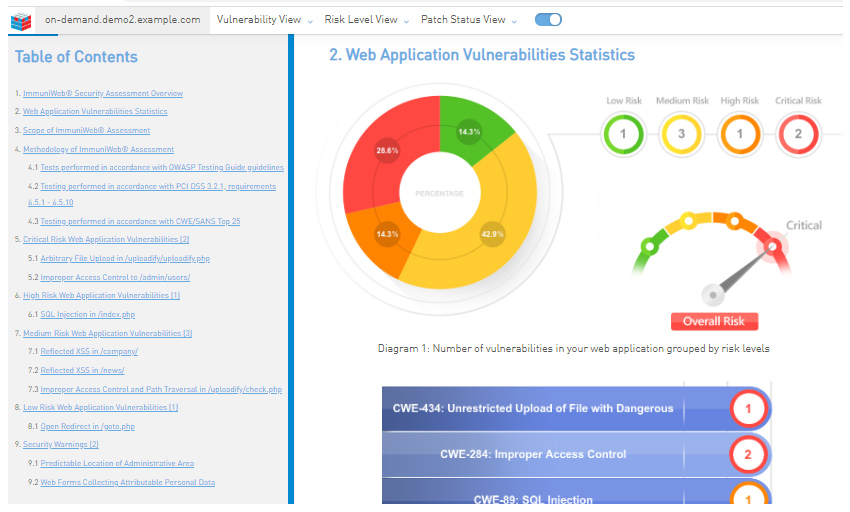 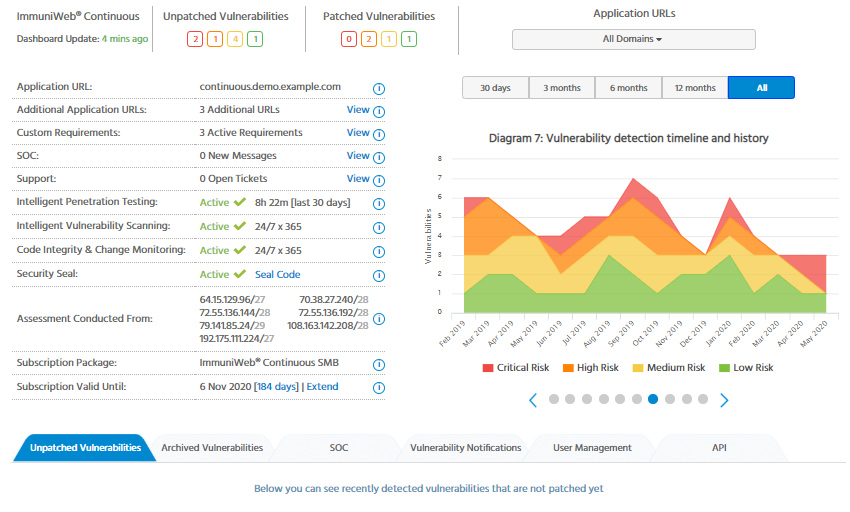 Identify, prioritize and mitigate your
cyber risks in a timely manner

Avoid redundant and overlapping
solutions that you don’t need

Protect Your Business From Cybercriminals