The Internet of Things is changing literally every sector of the economy, from households to manufacturing. To support this new round of the industrial revolution, it is necessary to provide reliable protection against cyber threats of all interconnected components for which IoT Penetration Testing is used. 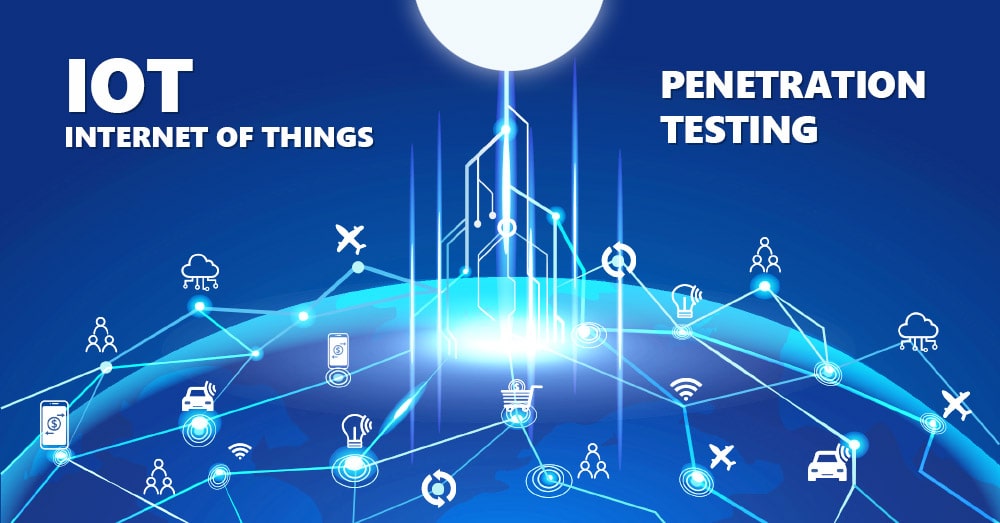 Can IoT Devices Be Used for Cyber Attacks?

Attackers tend to work for the masses, for example, in distributed denial of service (DDOS) attacks, in which thousands of emails or requests are sent to a server to slow it down or disable it altogether. In this case, in the future, we may face situations when hackers try to "fill up" as many machines as possible in the hope that some of them will not work properly.

Want to have an in-depth understanding of all modern aspects of IoT Penetration Testing? Read carefully this article and bookmark it to get back later, we regularly update this page.

Having gained access to an Internet of Things server, an attacker can use the devices for his own purposes, for extortion or data exploration for subsequent attacks on the network with stronger and more dangerous consequences. Perhaps this is the reason why governments are talking about the potential dangers of the Internet of Things associated with cyberattacks.

Several years ago, the CIA noted a threat from a smart refrigerator that was used as part of a botnet to carry out a DDOS attack! And all this happened completely unnoticed by the owner of this refrigerator, who had no idea that his smart device could perform any harmful actions, except to cool and preserve food. Funny but true.

The Gartner study notes that cyberattacks on the Internet of Things have become a reality. About 20% of organizations surveyed by Gartner encountered them in the period from 2015 to 2018. According to Gartner analyst Ruggero Contu, when deploying the Internet of Things, companies often do not pay attention to the software, as well as its features.

IoT security is becoming a business priority and the implementation of the best cybersecurity practices and tools is already being taken into account when planning IoT. According to experts, the main driver of growth in the market under consideration is the demand for tools and services that improve threat detection and asset management, assess the security of equipment and software, as well as testing for the protection of IoT systems from unauthorized access. Gartner predicts that these factors will drive IoT security spending to $ 3.1 billion in 2021.

What Is IoT Penetration Testing?

IoT Penetration Testing is conducted to solve the problem of the Internet of Things (IoT) use to penetrate computer systems. The Internet of Things is actively spreading around the world and is at the beginning of a burst of development. This is facilitated by factors such as 5G networks, Industry 4.0 or the Fourth Industrial Revolution, the growing possibilities of microprocessor computing.

Smart home, smart business, and the industrial segment of IoT devices have similar implementation problems, namely the lack of uniform standards, including documentation standards, high-quality descriptions of protocols, high cost of security, lack of microchip resources for the high-quality implementation of encryption, authentication and others.

Traditionally, embedded devices have been thought to work on their own and are not connected online, which means they don't really need reliable protection. However, digital transformation and the Internet of Things have fundamentally changed the situation. Now all components are interconnected, and they require comprehensive protection against all threats, including:

According to principle of end-to-end information safety, cybersecurity should be laid at the initial stage of product or service development and maintained until the end of the life cycle. Researchers are focusing on issues both on the side of device owners and issues for developers. So, at the very beginning of operation, the user must necessarily replace the factory default password with his personal one, since the factory passwords are usually the same on all devices. Unfortunately, not everyone does it. Since not all appliances have built-in security features, owners should also take care to install external antivirus software for home use so that Internet devices do not become open gateways to the home network.

About two-thirds of the devices analyzed did not encrypt wireless traffic. Experts considered the web interface of more than half of the devices unsafe due to the insecure organization of access and the high risks of cross-site scripting. Most devices have passwords that are not strong enough. In addition, more than 90% of devices collect some kind of personal information about the owner.

In total, experts have counted about 25 different vulnerabilities in each of the studied devices and their mobile and cloud components. The experts' conclusion is disappointing: a sufficiently secure IoT ecosystem does not yet exist. The IoT devices are especially dangerous in the context of the spread of targeted attacks (APT).

In the IoT, there are many opportunities for hackers to attack. Most vulnerabilities are related to the insecure overall IoT ecosystem:

The widespread use of these devices means that if one of them is compromised, the manufacturing company will not be able to quickly recall all the devices or enhance their security. In addition, hackers can penetrate the entire network through one device. Thus, one device will provide unauthorized access to a wide range of confidential data - from bank details to medical records, and even to important corporate information, given that many people use the same devices at home and at work.

Therefore, the safest solution would be to use asset discovery , when no possible vulnerability of any device connected to your network will be missed.