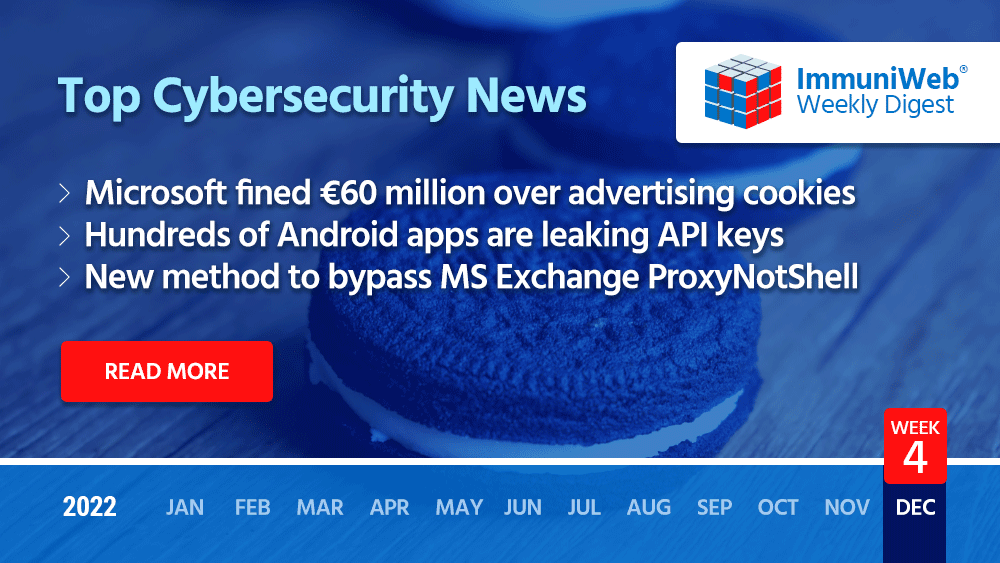 France’s National Commission for Technology and Freedoms (CNIL) has fined Microsoft Ireland €60 million for failing to implement a mechanism to allow people refuse cookies as easily as accepting them.

According to the CNIL, when users visited the website bing[.]com, “cookies were deposited on their terminal without their consent, while these cookies were used, among others, for advertising purposes.”

While Microsoft’s search engine offered a button to accept cookies immediately, it did not provide an option to refuse the cookies in the same way, instead, more complex refusal mechanism was present, which “actually discourages users from refusing cookies,” the watchdog said.

The affected apps have been downloaded by 54 million people, mostly in the US, UK, Spain, Russia, and India. All apps’ developers have been notified of the issue.

The new exploit chain, dubbed “OWASSRF,” makes use of the CVE-2022-41082 vulnerability (one of the two bugs collectively referred to as “ProxyNotShell”) together with a privilege escalation bug, tracked as CVE-2022-41080 to bypass URL rewrite mitigations that Microsoft provided for ProxyNotShell.

It appears that only Exchange servers using Microsoft’s mitigations are vulnerable, patched servers are not impacted.

Epic Games, a company behind the popular Fortnite video game, will pay a total of $520 million for privacy violations and engaging in deceptive practices.

Specifically, the US Federal Trade Commission (FTC) has fined the Fortnite maker $275 million for collecting personal data of children under the age of 13 without their parents’ consent, as it is required by the Children’s Online Privacy Protection Act (COPPA). The company has been ordered to adopt strong privacy default settings for children and teens, ensure that voice and text communications are turned off by default, and delete the unlawfully obtained data.

In addition, Epic Games will pay $245 million for tricking millions of players into making unwanted in-game purchases by using a deceptive practice known as “dark patterns.”

According to a press release, the incident took place earlier this month and affected Okta Workforce Identity Cloud (WIC) code repositories. The breach was limited only to the source code theft, and did not impact the Okta service or customer data.