Millions of stolen corporate credentials available in the Dark Web are exploited by cybercriminals for spear-phishing and password re-use attacks against the largest global companies. 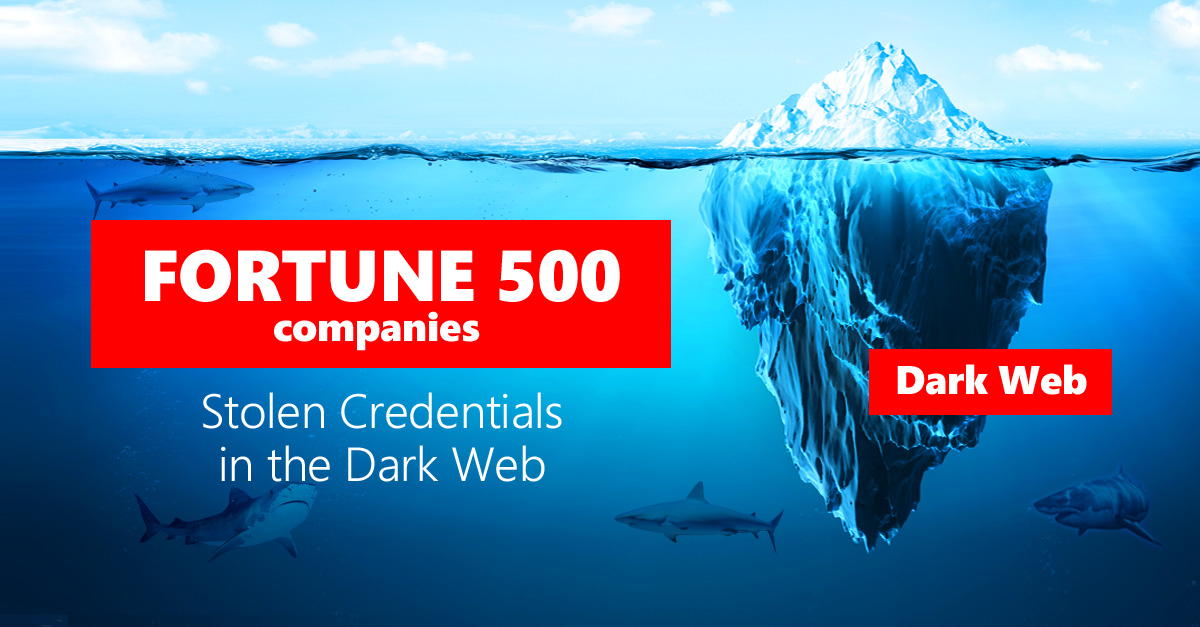 Data stolen and exposed in the Dark Web makes media headlines in 2019. Both the reported data breaches and the number of records exposed therein spiked by over 50% during the Q1 2019 compared to the previous year, and attained a flabbergasting number of 4,000 breaches, exposing over 4 billion compromised records (source: Risk Based Security). Security expert Troy Hunt’s website has a collection of over 8 billion credentials collected in the Internet.

At ImmuniWeb, we decided to shed some light on the skyrocketing growth of data breaches targeting corporates. For this purpose, we analyzed the quality and quantity of stolen credentials accessible on the Dark Web from Fortune 500 companies from 10 different industries across the globe.

We found over 21 million (21,040,296) credentials belonging to Fortune 500 companies, amid which over 16 million (16,055,871) were compromised during the last 12 months. As many as 95% of the credentials contained unencrypted, or bruteforced and cracked by the attackers, plaintext passwords.

The most popular sources of the exposed breaches were:

For obvious ethical and legal reasons, we did not try to login into any of these accounts. We verified accuracy and reliability of data by correlating, cross-checking and juxtaposing the data from different public sources aided with Machine Learning (ML). ImmuniWeb’s ML models were used to find anomalies and spot fake leaks, duplicates or default passwords set automatically - that were excluded from the research data.

1. Stolen Credentials per Industry
2. Most Popular Passwords per Industry
3. Top Industries with Weak or Default Passwords
4. Other Interesting Facts
5. How to Reduce Your Dark Web Exposure
6. Conclusion

This is a full version of the research, we are unable to send any samples of compromised records to anyone for security and privacy reasons.

Below are the industries with the highest numbers of stolen credentials. Unsurprisingly, the largest and the most targeted industries top the list:

Most Popular Passwords per Industry

In total, we found only 4.9 million (4,957,093) fully unique passwords amid the 21 million records suggesting that many users are using identical or similar passwords. Below are the most popular passwords per industry:

Below are the top 10 industries ordered by the highest percent of weak passwords (less than 8 characters, found in common dictionaries or default ones). The volume of weak passwords is astonishing and alarming:

During the research, we also spotted some interesting facts and trends:

How to Reduce Your Dark Web Exposure

Credentials and other data stolen both in unreported and high-profile data breaches are incrementally used by cybercriminals in spear-phishing campaigns, social engineering and password re-use attacks. Simple at the first glance, they can be terrifically efficient and effective compared to other, more complicated or expensive cyberattacks. To prevent, or at least to minimize, the impact of such data breaches we suggest the following:

Ilia Kolochenko, CEO and Founder of ImmuniWeb, says: “These numbers are both frustrating and alarming. Cybercriminals are smart and pragmatic, they focus on the shortest, cheapest and safest way to get your crown jewels. The great wealth of stolen credentials accessible on the Dark Web is a modern-day Klondike for mushrooming threat actors who don’t even need to invest in expensive 0day or time-consuming APTs. With some persistence, they easily break-in being unnoticed by security systems and grab what they want. Worse, many such intrusions are technically uninvestigable due to lack of logs or control over the breached [third-party] systems.

In the era of cloud, containers and continuous outsourcing of critical business processes, most organizations have lost visibility and thus control over their digital assets and data. You cannot protect what you don’t see, likewise you cannot safeguard the data if you don’t know where it’s being stored and who can access it. Third-party risks immensely exacerbate the situation by adding even more perilous unknowns into the game.

A well-thought, coherent and holistic cybersecurity and risk management program should encompass not just your organization but third parties in a continuous and data-driven manner. At ImmuniWeb, we work hard to illuminate external attack surface and Dark Web exposure for our customers, bringing peace of mind and assurance to our clientele and partners.”

4 Reasons Why Your Company Should Use IT Security Software