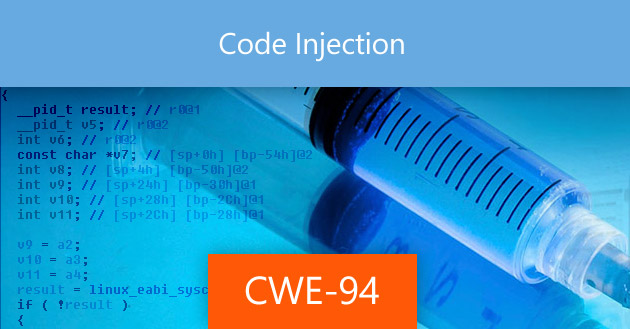 Want to have an in-depth understanding of all modern aspects of Code Injection [CWE-94]? Read carefully this article and bookmark it to get back later, we regularly update this page.

This weakness describes a situation where software uses untrusted input to contrast all parts of code and does not perform or incorrectly performs neutralization of special characters that might influence syntax or behavior of the code segment.

Basically an attacker might be able to inject and execute arbitrary code within the application. The following example in PHP demonstrates usage of the eval() function in untrusted input:

An attacker is able to pass in the "param" parameter arbitrary PHP code which will be executed:
http://[host]/script.php?param=1;phpinfo();

The above example demonstrates call to the phpinfo() function. This weakness could be exploited further to execute arbitrary OS commands on the target system via system() call.

The maximum impact of this weakness depends on software design and implementation. This weakness may allow an attacker to execute arbitrary code within the application and to compromise the vulnerable system.

There are following CAPEC attack patterns which correspond to this weakness:


This weakness is not described as an attack technique in WASC Threat Classification database.

Any software that evaluates untrusted input or uses it to construct code is potentially vulnerable to this weakness.

Successful exploitation of the vulnerability requires that the "viewer_size_image" plugin is active.

To demonstrate the vulnerability we will use a simple telnet utility to alter the HTTP query and set a specially crafted COOKIE value for the "viewer_size_image_saved" parameter, as shown on the image below:

The server will return the following data containing output of the injected command: 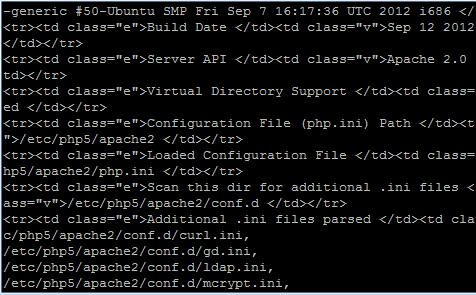 The output contains details of the installed PHP version, this means that the "phpinfo()" function is executed successfully. An attacker can execute arbitrary PHP code on the target system and gain complete control over it.

Severity of the vulnerability depends on the language that was used to create the application. If injection occurs within javascript code the maximum potential impact is cross-site scripting. In case of reflected XSS it should be scored as:
6.1 [CVSS:3.0/AV:N/AC:L/PR:N/UI:R/S:C/C:L/I:L/A:N] - Medium severity.

If javascript code can be stored in database or files and then executed in the browser it should be scored as:


But if injection occurs within PHP code, the vulnerability could be used to compromise the entire system and it should be scored as:
9.8 [CVSS:3.0/AV:N/AC:L/PR:N/UI:N/S:U/C:H/I:H/A:H] - Critical severity.

The usage of untrusted input to construct parts of code is considered poor practice. Developers should avoid using raw input data to construct code. If code generation depends on external input predefined choices should be used.

In most cases, it is enough to remove all potentially dangerous symbols to defend the application. Assume that the "param" parameter is passed via HTTP GET or POST request to the application and is later used in the eval() function. The examples below demonstrate usage of regular expressions in popular languages to remove potentially dangerous symbols and make the input data safe:

These are general recommendations. Every case must be treated separately, considering logic of the way the application works, as well as singularity of the system and tasks. Direct coping of the data into the code can cause disruption of the application function or improper patching of the vulnerability.

Let’s have a look at PHP code injection vulnerability in TinyWebGallery descibed in HTB23093 (CVE-2012-2931). The application does not perform validation of the “user” HTTP POST parameter before writing data into .htusers.php file. We can eliminate this threat by allowing only alphabetical symbols in vulnerable parameter: