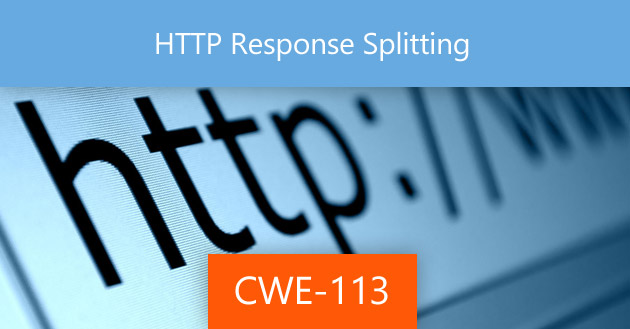 Want to have an in-depth understanding of all modern aspects of HTTP Response Splitting [CWE-113]? Read carefully this article and bookmark it to get back later, we regularly update this page.

This weakness occurs when software accepts data from an upstream provider, but does not neutralize or incorrectly neutralizes CR and LF characters before including data into HTTP response headers. This provides an attacker with ability to inject arbitrary headers into the HTTP response, which is sent to a client. As a result an attacker might be able to modify contents of the HTTP response by means of unexpected CR (carriage return - %0d or \r) and LF (line feed - %0a or \n) characters and send to the browser two different HTTP responses instead of one. The attacker, who controls the second HTTP response, can perform different attacks such as cache poisoning and cross-site scripting.

The following example works with PERL and demonstrates the vulnerable code:

With ASP.NET 2.0 this attack is almost impossible, because the "\r\n" sequences are disallowed by default in methods that involve HTTP response headers. It is possible though to turn off HTTP response splitting protection by disabling the "enableHeaderChecking" option in web.config. Make sure this option is set to true.

PHP is not vulnerable to HTTP response splitting since version 5.1.2.

An attacker might be able to perform cross-site scripting, phishing and cache poisoning attacks. This weakness is a significant threat for high load servers that use caching proxies to deliver content to the end-users. One request sent by an attacker can be cached and displayed to all visitors of a webpage. As a result, an attacker might be able to gain access to potentially sensitive data and perform different attacks against website users.

CAPEC has the following patterns for this weakness:


This weakness is described in WASC classification as four separate techniques:

Any software that uses input data to construct headers is potentially vulnerable to this weakness. In most cases these are web applications, web servers, caching proxies.

Depending on potential damage this weakness could impact integrity of the application and is usually scored as:
5.3 [CVSS:3.0/AV:N/AC:L/PR:N/UI:N/S:U/C:N/I:L/A:N] – Medium severity.

All input passed to the application must be considered untrustworthy and should be handled as such. Use a good known input validation strategy based on whitelists to construct headers and do not rely exclusively on looking for malicious or malformed inputs. All input should be decoded and canonicalized to the application's current internal representation.

Usage of the header() function for HTTP headers output is safe in modern PHP versions.

With ASP.NET 2.0 this attack is impossible, the "\r\n" sequences are disallowed by default.

These are general recommendations. Every case must be treated separately.

Attackers can use different character encoding to bypass certain filters: