OS Command Injection weakness describes improper neutralization of special elements, which could result in modification of the intended OS command that is sent to a downstream component. 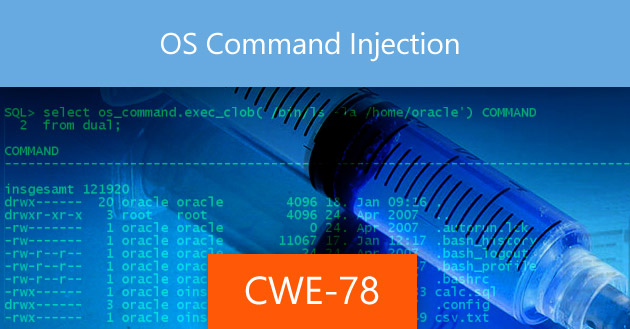 If the weakness occurs in a high privileged program, it may allow an attacker to specify commands that would not be available otherwise, or call alternate commands with privileges that the attacker does not have.

The danger of this weakness is aggravated if the breached process does not follow the principle of the least privilege because the malicious command may gain system privileges and allow the attacker to cause additional damage.

There are two major subtypes of OS Command Injection:

An attacker can leverage this weakness to execute arbitrary commands, disclose sensitive information and cause denial of service. Any malicious activities would appear to come from the vulnerable application and will be executed in the security context of that application.


In an alternative WASC Threat Classification this weakness is described as an attack technique under WASC-31.

Software that uses external input to send commands to the operating system can be vulnerable to this weakness. The weakness is common for many web applications.

Let's have a look at vulnerability #2 in HTB23069 security advisory (CVE-2012-0992). Exploitation requirements dictate that user is logged-in into the application.

Execution result is shown on the image below: 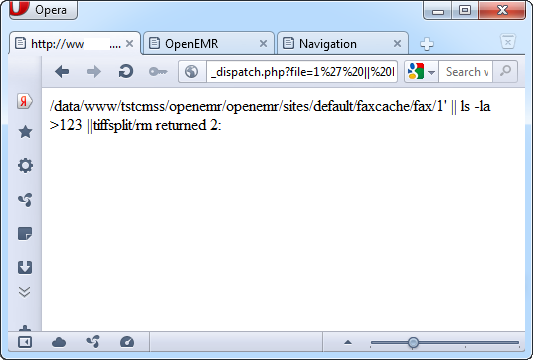 This PoC code creates a file named 123 in the current directory with output of the "ls –la" command. We can access the file directly to view its contents: 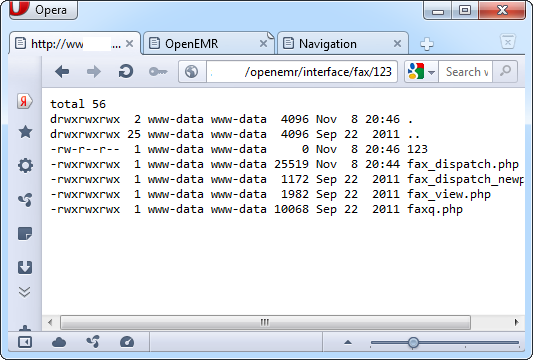 This vulnerability can be used by any authenticated user to execute arbitrary commands on the target system with the privileges of the webserver as well as completely compromise the vulnerable application.

When scoring OS Command Injection weaknesses, security specialists must consider the maximum possible impact. If an attacker can execute arbitrary commands with privileges of a system user the vulnerability must be scored as C:H/I:H/A:H.

To defend systems from this weakness, developers need to use library calls when possible, to create the desired functionality without external input. When external input is inescapable, developers need to use secure input and output handling. Sanitizing functions that attempt to catch each potentially dangerous character are prone to bypasses, a safer approach is to ensure that the data appears as it should before being processed, by using an appropriate regular expression.

As a temporary solution we strongly recommend blocking access to the vulnerable script until the issue is resolved. This can be achieved either using native functionality of the webserver or changing system access permissions to file.

Edit the configuration of your virtual host (usually this can be done via ".htaccess" file) and add the following lines:
<Files script.php>
order deny,allow
deny from all
</Files>

You can also allow access to file from specific IP address:
<Files script.php>
order deny,allow
deny from all
allow from 10.0.0.1
</Files>

Add the following rule to the "nginx.conf" file to restrict access to the "script.php" file located in the webroot folder:
location /script.php {
deny all;
}

All parameters should be enclosed in quotes in most cases to prevent successful exploitation of the vulnerability. Special symbols within parameter values must be escaped or replaced by safe symbols. Sometimes it is necessary to subtract all special symbols and spaces.

Assume that the "param" variable receives input via HTTP GET or HTTP POST request and then is used as a part of the filename within functions that manipulate files. In this case developers should follow instructions below to avoid the appearance of vulnerable code.

These are general recommendations. Every case must be treated separately, considering application logic, peculiarities of each system and required functionality.

The following rule is part of the core rule set modsecurity_crs_40_generic_attacks.conf and can be used to protect web application against basic command injection attacks:

The rule searches for “bcc”, “wget”, “curl” and “cc” substrings within the request. OS command injection is hard to detect and block this way because there might be numerous ways to execute commands on the system.

Let’s have a look at OS command injection vulnerability in CosCms described in HTB23145 (CVE-2013-1668). The application uses the PHP "exec()" function to perform certain actions on the uploaded file. An attacker can create an HTTP POST request with a specially crafted filename and execute arbitrary commands on the system, as demonstrated by the PoC code. To mitigate this vulnerability we will have to validate filenames and allow only safe characters:

A blacklist approach to filtering special characters is dangerous, as alternate characters and encodings may be used to break from the current context.

Below is a small list of examples of alternate characters that could be utilized by an attacker: