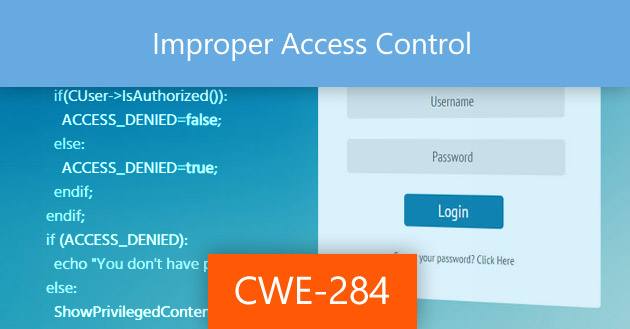 Want to have an in-depth understanding of all modern aspects of Improper Access Control [CWE-284]? Read carefully this article and bookmark it to get back later, we regularly update this page.

MAC is an access control model implemented in many modern operating systems such as SELinux (since kernel 2.6), FreeBSD (since 5.0), SUSE Linux, Ubuntu, Microsoft Windows (starting with Vista), etc. In MAC a security policy administrator controls the overall security policy. Users do not have the ability to override the defined policy set and e.g. grant access to otherwise restricted objects. This policy is based on mandated regulations determined by a central authority.

The DAC access control model is based on identity of the requestor and defined access rules that determine allowed actions. Access decisions are typically based on provided credentials and are subject to manipulation within specified bounds. In most DAC model implementations the owner of the object can modify its permissions and transfer ownership to other subjects.

Role-based policies control access to objects depending on the roles that user have within the system and on rules that define access permissions for users in the given role.


The following PHP code can be used as an example of the improper access control weakness:

In the above code, the ACCESS_DENIED constant is erroneously declared as false. An attacker might be able to send a HTTP POST request to the script, bypass the authorization checks intended for the HTTP GET method, and gain access to output of the ShowPrivilegedContent() function.

This weakness allows an attacker to bypass intended security restrictions and perform a variety of actions depending on the source of error and functionality of the application. An attacker might be able to perform certain actions by gaining elevated privileges, reading otherwise restricted information, executing commands, bypassing implemented security mechanisms, etc.

There is only one CAPEC pattern that is related to this weakness:


This weakness is not described as an attack technique in WASC Threat Classification database.

Any software intended to handle access controls is potentially vulnerable to this weakness.

This vulnerability could be scored differently depending on application's design, its functionality and potential security impact. In case an attacker gets full control over the application or can read, modify and delete data, it should be scored as:
9.8 [CVSS:3.0/AV:N/AC:L/PR:N/UI:N/S:U/C:H/I:H/A:H] – Critical severity.

Improper access control weaknesses usually result in logic errors. Developers must carefully manage settings and handling of privileges as well as pay attention to security zones within the application. They should also integrate mechanisms that control privilege separation functionality and think about creating architecture that relies on the least privilege principle.