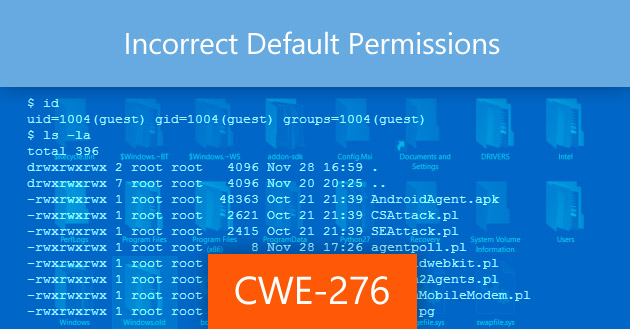 Want to have an in-depth understanding of all modern aspects of Incorrect Default Permissions [CWE-276]? Read carefully this article and bookmark it to get back later, we regularly update this page.

This weakness describes a case where software sets unintended permissions to directories, files or other objects during installation process. As a result, a malicious user might be able to bypass intended security restrictions.

General permissions
Access permissions in Linux and UNIX-like systems are based on three user classes (user, group, and others) and three access modes (read, write, and execute).

Ownership rights for each directory and file are set by the chown(1) and chgrp(1) commands and are based on user and group identifiers.

The following table demonstrates differences between access modes for directories and files:


Setuid/setgid bit
Setuid and setgid bits are access flags used to run applications with permissions of the executable's owner or group respectively. Setuid/setgid bits are usually set for applications that need elevated privileges on the system, e.g. the ping command must send and listen for control packets on a network interface and thus needs elevated privileges, since regular user is not allowed to do so.

In our case the /bin/ping executable is owned by root. This means that having write-access to this executable might allow execution of arbitrary code on the system with root privileges. That's why it is very important to keep track of these files. 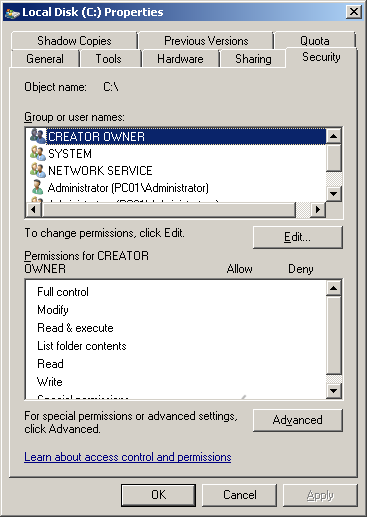 Access rights to registry keys are managed by the regedit.exe utility. Since Windows-based operating systems depend on system registry, having insecure permissions on keys and hives might weaken system security and allow an attacker to gain unauthorized control over the system.

Usually this weakness is locally exploitable. A malicious user might be able to gain access to sensitive information, tamper with sensitive data or compromise the vulnerable system entirely. If a setuid/setgid executable has world writable permissions any local user can inject malicious content into it and execute arbitrary code with privileges of the file's owner.

Basically, any application writable by an unintended actor poses a threat to system security and might be used to elevate privileges on the system, e.g. if such application was modified by a malicious and unprivileged user before being executed by a privileged one.

The following CAPEC patterns correspond to this weakness:

Software that changes access rights to objects during installation is potentially vulnerable to this weakness.

We will use the HTB23123 security advisory (CVE-2012-5697) as an example of this weakness. The vulnerability is introduced by the "btinstall" installation script that sets world-writable permissions for all files within the "/frameworkgui/" directory.

Let's login into the system under unprivileged guest account. To view files permissions we will execute the "ls –la" command, as demonstrated on the image below:

Now we will try to read the "config" file and then modify the agentpoll.pl script:

As a result of this vulnerability any local user has full access to files within the "/frameworkgui/" directory.

In case of potential information disclosure (e.g. software configuration, credentials, etc.) this weakness should be scored as:
3.3 [CVSS:3.0/AV:L/AC:L/PR:L/UI:N/S:U/C:L/I:N/A:N] - Low severity.

This weakness could be used to tamper with potentially sensitive information such as log files. If data can be modified or deleted, it should be scored as:
5.3 [CVSS:3.0/AV:L/AC:L/PR:L/UI:N/S:U/C:L/I:L/A:L] - Medium severity.

If an attacker can modify a setuid binary or any other file that can be executed by another user or service on the system, privilege escalation is possible. In this case this weakness should be scored as:
8.8 [CVSS:3.0/AV:L/AC:L/PR:L/UI:N/S:C/C:H/I:H/A:H] - High severity.

Handling access rights is tricky, especially when software vendors are not doing it properly.